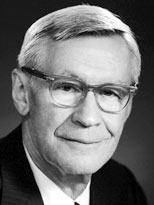 David Saxon joined the UCLA faculty in 1947 as assistant professor of physics. Three years later, he was one of 31 UC faculty members dismissed for refusing to sign the McCarthy-era loyalty oath, which violated the principles of freedom of speech and freedom of association.

Saxon then worked for the National Bureau of Standards before rejoining the UCLA faculty when the state Supreme Court invalidated the requirement. He later chaired the Physics Department and became Dean of Physical Sciences before being named to UCLA’s top academic post, now known as Executive Vice Chancellor.

Saxon left UCLA to become UC Provost in 1974 and served as UC President from 1975 to 1983. After serving as chairman of the MIT Corporation from 1983 to 1990, Saxon returned to UCLA once again, this time as an emeritus faculty member in the Department of Physics and Astronomy.

A comprehesive overview of Prof. Saxon's accomplishments is available in this Physics Today obituary from December 2005.

About the David Saxon Lectures

Professor Charles Kennel, as Chair of the UCLA Department of Physics, established the David Saxon Lecture in 1987. It is an annual lectureship, similar to the Regents Lectureship. Because the lectureship would be named for David Saxon, the speaker could either be in the elementary particle/cosmology field, or physics in general. 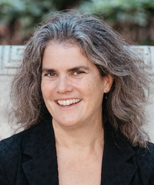 The proximity of our Galaxy's center presents a unique opportunity to study a galactic nucleus with orders of magnitude higher spatial resolution than can be brought to bear on any other galaxy. After more than a decade of diffraction-limited imaging on large ground-based telescopes, the case for a supermassive black hole at the Galactic center has gone from a possibility to a certainty, thanks to measurements of individual stellar orbits. The rapidity with which these stars move on small-scale orbits indicates a source of tremendous gravity and provides the best evidence that supermassive black holes, which confront and challenge our knowledge of fundamental physics, do exist in the Universe. This work was made possible through the use of speckle imaging techniques, which correct for the blurring effects of the earth's atmosphere in post-processing and allowed the first diffraction-limited images to be produced with these large ground-based telescopes.

Further progress in high-angular resolution imaging techniques on large, ground- based telescopes has resulted in the more sophisticated technology of adaptive optics, which correct for these effects in real time. This has increased the power of imaging by an order of magnitude and permitted spectroscopic study at high resolution on these telescopes for the first time. With adaptive optics, high resolution studies of the Galactic center have shown that what happens near a supermassive black hole is quite different than what theoretical models have predicted, which changes many of our notions on how galaxies form and evolve over time. By continuing to push on the cutting-edge of high-resolution technology, we have been able to capture the orbital motions of stars with sufficient precision to test Einstein’s General theory of Relativity in a regime that has never been probed before.

May 19, 1994: Sergio Ferrara, UCLA Physics and CERN, Theoretical Physics Division: Supergravity and the Quest for a Unified Theory (lecture delivered upon acceptance of the Dirac Medal)

April 29, 1997: Douglas Osheroff, Nobel Laureate, Stanford University: Superfluidity in 3He: The Discovery Through the Eyes of a Graduate Student

October 3, 2019: Michael Turner, University of Chicago: How many numbers does it take to determine our Universe?