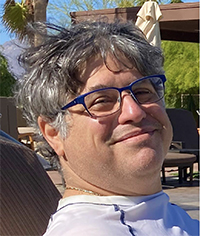 Alex was born on January 25, 1968 in Los Angeles to Francesca Alexander and Jacob Levine. He grew up in Pacific Palisades and attended Mirman School and Palisades High School. He earned his PhD in physics at UCLA, returning in 2005 as a member of the faculty. He married Catherine Nameth in 2006, and they welcomed their son, Laszlo, in 2012.

Alex was an accomplished and influential scientist who made key contributions to the physics of biological materials such as cell membranes and tissue material. His work has led to important advances in fundamental knowledge and to expanded options for the treatment of disease. He was an inspiring teacher and a vivid storyteller.

Alex was preceded in death by his parents and is survived by his wife and son. His presence will be greatly missed by many. A Requiem Mass will be celebrated at St. Thomas the Apostle, Hollywood on Saturday July 16 at 1pm.

To honor Alex, donations can be made to the Episcopal Diocese of Los Angeles, One Body & One Spirit Annual Appeal or to his son’s college fund, CollegeBound 529. Condolences can be sent to the family at 11740 San Vicente Blvd. Suite 109, Box 241 Los Angeles, CA 90049.

A Requiem Mass will be celebrated at St. Thomas the Apostle, Hollywood on Saturday July 16 at 1pm. St. Thomas the Apostle is located at 7501 Hollywood Blvd, Los Angeles, CA 90046. Church parking lot is on Gardner. Parking on Gardner is restricted to residents, however, a request has been made by the church to the City to waive parking tickets *on Gardner between Hollywood & Franklin only* for the afternoon of Saturday, July 16. Many surrounding streets, like Sierra Bonita, allow non-resident parking. The Requiem Mass will begin promptly at 1pm and will last approximately an hour.


Condolences can be sent to the family: