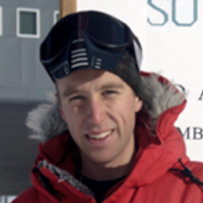 My interests lie at the intersection of elementary particle physics and astrophysics. Over the last century, particle physics experiments have gotten bigger and bigger and we are now able to probe the smallest scale and highest-energy physics using the largest detector in the the world: the Universe. And, at the same time that we can study the universe to learn about particle physics, particles sent to us from the universe's distant corners can also teach us a great deal about their origins.

My current projects involve astrophysics, neutrinos, and the South Pole. We have recently (2018) begun data taking with the 3rd-generation South Pole Telescope, the highest-angular-resolution instrument in the world for measurements of the Cosmic Microwave Background (CMB). This will provide an unprecedented view of the early universe and its evolution into our present-day surroundings over the last 13 billion years, revealing a great deal about the universe's origins, dark matter, dark energy, and the properties of neutrinos -- and possibly other light particles so far undiscovered. My work here involves instrumentation for this and future projects, as well as data analysis.

Another focus is the IceCube Neutrino Observatory, built to discover the origin of high-energy cosmic rays by looking for accompanying neutrino emission. The detector, completed in 2010, instruments a cubic kilometer of the Antarctic ice sheet with optical sensors to form the world's largest neutrino detector, sensitive at TeV-PeV energies. My work has focused on detection of the diffuse neutrino background and moving beyond that to discovery of the first neutrino sources. This has focused in particular on improving the performance of the instrument, leading directly to the first of these discoveries.