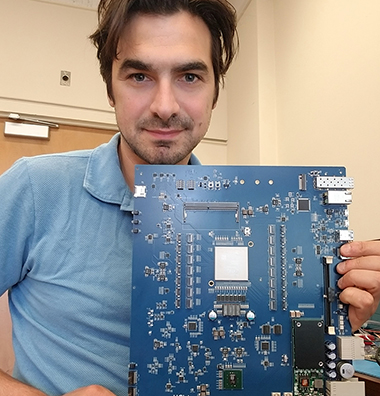 My research interest is focused in the energy frontier of particle physics where along with my other UCLA colleagues, I participate in the Compact Muon Solenoid (CMS) experiment at CERN’s Large Hadron Collider.

In the first LHC run, I played a leading role in the discovery and characterization of the Higgs boson through its Z boson and tau decays.

In Run II, my group is performing a search for heavy new resonances decaying to W,Z or Higgs bosons, in the highest TeV energy collisions of the LHC. Possible discovery of those particles could reveal new fundamental interactions, additional Higgs bosons, or more exotic scenarios such as extra dimensions.

In the upcoming Run III, we are shifting our focus towards long lived particles that could appear in decays of the Higgs boson. My group already upgraded the real time event selection system (L1 Barrel Muon Trigger) of CMS with a new tracking algorithm featuring a Kalman Filter in FPGAs which allows us to collect four times more data with displaced muon signatures than before, improving drastically the sensitivity for those searches.

In addition to data analysis, my group has the responsibility to build a major part of the Muon Trigger for the High Luminosity LHC featuring electronics boards with large FPGAs and multiple high speed optical links. We recently completed a hardware R&D program delivering the Ocean blade, a platform featuring an FPGA-CPU hybrid, achieving total bandwidth of 3 Tb/s through high speed optics. We are currently using Ocean to build prototypes of the final system while moving to the next R&D phase following the latest trends in technology.